Escape Rooms! Outside the box thinking and Teamwork

In the last few years the concept of Escape Rooms began to trend. As a lover of riddles and games, I immediately felt in love with the idea. To this day I did 53 rooms, most of them in Israel but I also played in Argentina, Amsterdam, Rome, Barcelona, Cyprus and more. I even beat the record in one room (24 minutes). After all this “resume” I see myself as a professional in this area. 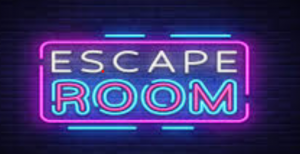 What is an Escape Room?

An escape room is a trivial-like game. If you are claustrophobic you won’t like what I’ll say next –  You are locked inside a room and you have 1 hour to exit it. The rooms are decorated according to a theme.

Prior entering the room you are described with the scene you are about to witness. This is the theme of the room, this is what makes the room different from the others. The theme can be something invented – a murder that needs to be solved, a kidnap that needs to be rescued and such. It can also be something that relies on real events – I was in a room that copied the story of a real robbery. It can also be themed to be like a movie or series –  there are rooms themed to be like The Hangover, Friends, Harry Potter and more. Exiting the room is the obvious goal, but what makes each room different from the others is its theme and decoration.

Inside the room – Outside the box

Once you enter the room you are (mostly) by yourselves. I say mostly because there are rooms which include actors to enhance the experience. Most of the rooms have many locks that need to be unlocked (numeric or with keys) to get the next clues. I was in two rooms which had no locks at all! To unlock the locks you’ll need to find their keys or other clues to get their correct combinations. You can always ask for hints if you feel stuck.

Most of the rooms have many inner-rooms. I was in rooms where we passed from one room to another via the fridge, in another we crossed via the laundry machine. There were actually very few rooms we used a door. What is common in all the rooms is that they make you think outside the box. You can expect to enter a whole new world inside the room. There are rooms that invest a lot in the decoration and scenery.

You aren’t alone in the room. The rooms are mostly for 2+ people. Many of the rooms I do with my girlfriend. Others I do with different groups of friends. The dynamic of the team is very important, it doesn’t matter how much experience you, or anyone in your team, have – the most important things are teamwork and communication. Choose people you are comfortable with.

Why did I do so many? Isn’t it repetitive?

No. Moreover – The more I do, the more difficult it is for me to do the next one. My mind gets set on something, I learn the rooms and expect something similar in the next one and they always surprise me.

There are people who did more than I, I think we just enjoy it a lot. Instead of going out to a bar or any other activity, I sometimes prefer going to an escape room and challenge myself to think.

From the first one I did I felt in love with the idea and knew I was going to do many more. I knew I won’t remember all the rooms I did (my memory is a mess) so I started an excel. I write in it the room I did, how much time it took me and with whom I did it. That’s why I can say things like: My best time is 24 minutes, my worst time is 69 minutes and my average is 45.81 minutes. I know how many times I did rooms with each of my friends. I highly recommend it!

What is it good for?

Escape rooms are first and foremost good for outside-the-box thinking. They inspire logical thinking and teamwork. You can never solve a room alone. The riddles are always different and require fresh and creative thinking.

Secondly, as you must work in a team, they strengthen teamwork. I did one room with my old work team and it was awesome. The team formation it built was very good. After all this Coronavirus saga ends, I’ll propose to my new team to go to an escape room.

The most important tip? Enjoy it! It’s a lot of fun!