A word before you start reading: This post will talk about AWS Cloud. This post isn’t a recommendation to work with AWS instead of GCP or Azure, it just happens that I work with AWS and know AWS more than the other two, so it’s easier for me to talk about it. That’s it, happy reading!

What started as a small glance at EC2 four years ago, turned into my first certification this week.

I’ve heard about the magic of serverless a few years ago, in my second or third year at the university. At first I thought the idea behind it was creating an App where all the data was inside it and it could communicate with other instances without a server in between. I mean, it’s called serverless, so it must be without a server. The little I knew…

Four years ago I got my first chance to work with an EC2 (don’t worry, I’ll explain everything) when me and two friends started making an App. I was in charge of the server side of the App and thought it would be wise to host it on a Windows EC2 as most of my knowledge was around C# and .Net. In a very few minutes, from the moment I clicked on “Create Instance” I had a fully operational Windows Server 2016 working for me.

I was already aware of all the VMs and servers stuff, but that completely amazed me. The ease of use, creation and access was (and still is) astonishing.

Two years ago, we decided to build a system on the Cloud (Capital “C” is required here). This is the moment I think I was really introduced to the Cloud and the Serverless notion. A huge world of options. A service for every need. Slowly, I began my journey into the world of Clouds.

Actually, it’s called a “Cloud” because when you draw many servers side by side, all the circles of the servers get combined into one shape that looks like, well, a cloud.

The Wikipedia definition is as follows: “Cloud computing is the on-demand availability of computer system resources, especially data storage (cloud storage) and computing power, without direct active management by the user.”

Let’s break this down:

“…Without direct active management by the user” – Meaning that I, the user, don’t have to actively manage any of the resources I use. The management is something I get as a service.

From that simple idea of IaaS, many more applications arrived. When using an EC2, you are responsible for OS updates and monitoring resource usages. But what If I just want to run a simple python script now and then? Do I need the overhead of the whole OS?

Think about this scenario, you have a simple python script that you want to run every few minutes. Do you really care if it runs under Windows or Linux? Let’s say it’s a really simple script, do you care how much memory or CPU you have available? You just want to run your script, not maintain a whole OS.

This is where the power of the Cloud is noticed.

I just want to run my function, don’t bother with OS updates, firewall, memory, disk, cpu and such.

Introducing AWS Lambda (Azure Functions or GCP CloudRun). This service does exactly that. You write the function, the service runs it. You don’t care on top of what server it runs. That is Serverless.

There are queuing services, to manage messages from different services.

There are notification services that allow you to send mails, SMS and such to different subscribers. There are ML and AI services, Container services, Storage, CDN and more. The list is really huge and they all just keep adding.

Now you may ask yourself, why should I use a Lambda function and not an EC2. “I know Linux, I feel more comfortable running my script on an OS”. Well, beside the downfalls I described earlier, there is one more (huge) difference; the price. Lambda functions are much (much) more economic than running an EC2. And that’s another difference between all the services. You better choose the right service for your needs as it will be cheaper for you to run it for what it was made.

And that’s the Cloud.

It’s not in the sky, it’s someone else’s computer. 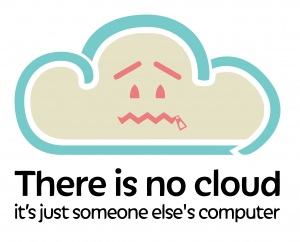 The developer’s learning path never ends. I always think of how little I know and try to keep up with the world.